The intended ultra-luxury resort will debut in Grenada’s rural parish of St. David upon La Sagesse Beach – a horseshoe cove herald by the UK Telegraph and the Sunday Times as one of the best beaches in the Caribbean. The 100-room resort will be representative of the wellness journeys and farm to table experiences typified by the Six Senses brand worldwide.

Six Senses La Sagesse is expected to transform Grenada, creating a second tourism capital, bringing much needed employment and economic stimulation to the parish, as well as the greater island. “With six senses we will create the exceptional in St. David. If we are successful in our ambition, the La Sagesse mass development will feature two ultra-luxury hotels with significant branded residential villas. Once complete, the hotel will create significant employment,” said Mohammed Asaria, Managing Director at Range Developments.

In St. Kitts and Nevis where Range Developments constructed the Park Hyatt as part of St. Kitts’ Citizenship by Investment Programme, extensive training was provided within hospitality school programmes, and 93% of the employees hired were locals. It maintained the same strategy in Dominica where it is set to open the Cabrits Resort Kempinski on October 14.

“From the outset we commit to integrate with the communities to ensure maximum local consumption and employment. Reliance on import must be a fading strategy and as soon as Six Senses operations start up, we will connect with all categories of producers so the local supply chain can be effective as possible. The benefits of this project will be felt island wide,” he added.

Deliberations to establish the project in Grenada first began when directors from Range Developments visited Grenada in December 2018. The company, which had first shown interest in Grenada in 2013, was encouraged to reconsider the island as part of its development strategy by another CBI real estate developer – Ambassador Dr. Richard Nixon, Director and CEO of both Hideaway True Blue and Kalypso Marketing.

Since December, Range Developments has been working assiduously with the Government of Grenada to move the project along. In less than four months, the company was able to close on the transaction and less than seven months from the date of signing, will be mobilised and on site.

Grenada’s Prime Minister, Dr. the right Hon. Keith Mitchell, commended the Range team for selecting Grenada and commended his delegation for the work done thus far in working together with Range to move the project along. “I’m proud of what we have seen happening in our country today. Mohammed I’m proud that you have chosen this country and I’m proud of the team we had leading this project. I know and I feel confident that we have a winning team.”

The attention being placed on Grenada by investors, particularly within the tourism industry, should be seen as an indicator of the island’s economic stability and prowess the Prime Minister assured.

“I make the point that what we have seen in our country within the hotel industry is that local hoteliers themselves have been investing and that’s a sign of confidence in the economy. Foreign investors will not come if they do not see the locals themselves taking risk. That is a good measure of what is going on in our country and so we take a lot of pride from what we see.”

Indeed, Grenada’s tourism industry has been going through a renaissance of sorts. In 2018, the island surpassed the half million mark for tourist arrivals and recorded a 3% year on year growth for the first half of 2019. This does not account for the 37,000 plus visitors, who flocked to Grenada’s shores during the period July 15 to August 13. Today, Grenada boasts many luxury resorts including the ultra-luxury Silversands, Sandals La Source, Spice Island Beach Resort, and the Royalton, which will be completed soon.

Added to its inventory of quality room stock is the fact that Grenada has grown more accessible with direct connections to Canada, the Caribbean, Germany, the UK, and the US through airlines like Air Canada, American Airlines, British Airways, Caribbean Airlines, Condor Airlines, Delta Airlines, JetBlue Airways, LIAT, Sunwing Airlines, and Virgin Airways. It also boasts a luxury private jet facility – the I am Jet Centre, which caters to the very clientele targeted by the Citizenship by Investment Programme. 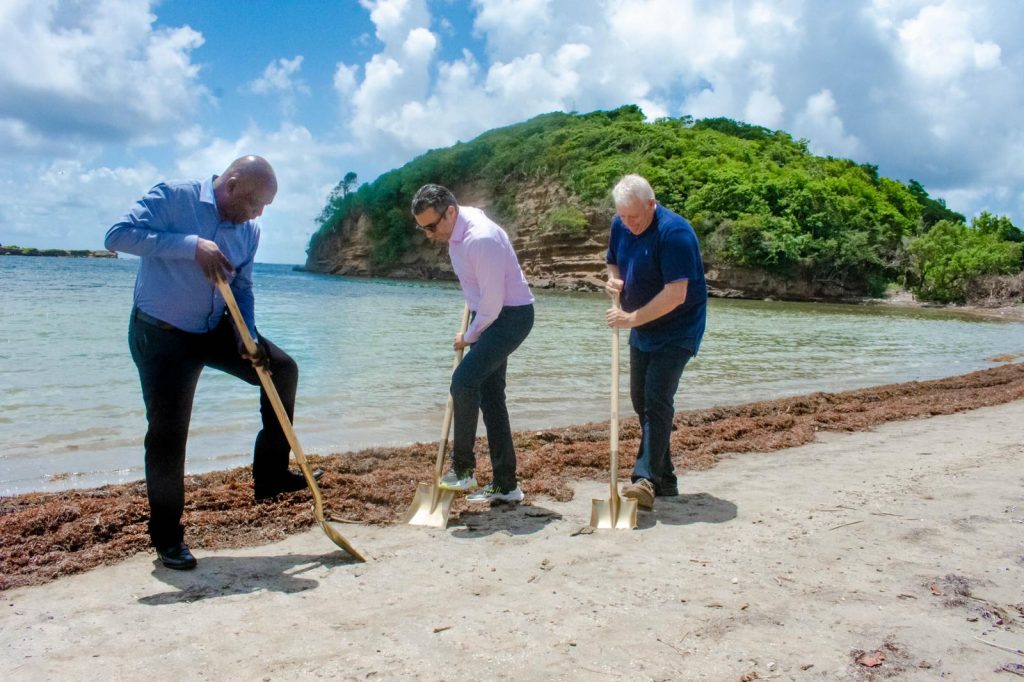 The island’s Minister for Tourism, the Hon. Dr. Clarice Modeste-Curwen, who has publicly expressed her delight at Grenada’s growth strategy, stresses the need for quality room stock in attracting more airlift to the island. Dr. Modeste-Curwen believes that Range’s addition of two hotels, including the Six Senses La Sagesse, will benefit in both respects.

“Range and Six Senses bring to the industry an indisputable high level of expertise and excellence developed over several years in valorous regional and international destinations. Their facilities and accommodations are indeed world renowned,” the Minister said.

“At the end of 2018 we had licensed 2,242 rooms and this current room stock is expected to grow by 30 percent at the end of 2022. Range and Six Senses will play a major role in this regard.”

Quality room stock and greater airlift aside, the presence of Six Senses in Grenada will change the island’s landscape assured Omar Romero, Vice President Developments at Six Senses Hotels and Spa, who addressed the gathering at the project initiation ceremony.

According to Romero, Six Senses doesn’t just develop luxury resorts, but resorts that are respectful to the environment and give back to the planet. At its core is its philosophy of delivering genuine projects that showcase a destination not just another international brand.

“We are very excited to work with Range Developments. We are very grateful to Kamal and Mohamed for their trust and we couldn’t dream of a better company to work with and come to the Caribbean with. They have a proven track record of delivering high quality products within the Caribbean and examples are there for you to see,” Romero said.

“You have St. Kitts and they are about to open in Dominica. We are very confident that together with them we are going to deliver the next great hotel in the Caribbean.”

Six Senses La Sagesse is being built on 24 acres and is nestled around a natural pond and between two beaches. Shares in the project are currently being offered for sale within the CBI market for $220,000. The resort should open in the year 2022.